Play together with - others at play.chunkcloud.net


Time for another update guys!

If you've played on the server, you've probably noticed that SkyBlock has been removed from the server selector and that Survival is the only remaining gamemode. This is not a mistake, this was done on purpose to prepare for the upcoming server 'Custom Survival' update.

After the previous update - which changed NLGameVideosNL into ChunkCloud - I had mixed feelings about SkyBlock and other gamemodes which I wanted to install. I kind of liked the variety of gamemodes, but on the other hand it left me no true way of customizing the server: Too many gamemodes means too many ways to customize the different gamemodes which results in less customized gamemodes over-all, if that makes any sense.

Because of this, I've decided to transform the server in an all-survival server, with tons of custom features like mobs, new items, etc. In this post I want to quickly inform you about what I'm working on, when the update will be and how it will impact your experience.

Custom items
About a year ago, I was planning on adding Tekkit-like items to the server but never set through with my plans. The idea was that I would add Tekkit items to the server via a resource pack and with some item durability tricks, however I didn't feel like Tekkit would fit into the server's theme.

This time however, the items will fit the theme and make use of some of the new features I've added in the previous update, like monster souls.

If you are part of our Discord server, you've probably already some sneak-peeks of the new items I've been adding to the game. Since I posted the sneak-peeks, I haven't had time to add any other items except for those but a lot more items will be added before the update will go live.

A few of the items that will be added are: Soul Dust, Soul Binders, Silver & Gold Coins, Crystals and Scrolls.

The detailed list of items and their usage will be posted here soon.


Leveled monsters
The previous server update introduced a whole new monster system, named 'tiered monsters'. The idea behind it was that monsters would become a challenge again and return the fun of hunting monsters for their loot. Monsters would have a tier from 1 to 6 and drop special items, like monster souls at random. This will not change, however the spawn rates, drop rates and the tier names will.

Right now, the tier of the monster will show above the monster's head like 'Tier 4' or 'Tier 1'. This will change to 'Zombie [Level 1]' or 'Creeper [Level 4]'. The names will also no longer be visible from a distance and will only show what level the monster is once you are near it.

The drops will also change and a whole set of new custom drops will be added to the loot tables. Monster souls will drop more often and the special items will drop at random.
Since it would be really easy to farm the custom items with monster spawners, a new monster level will be introduced named the 'spawner' mob. These monsters will not drop any loot apart from the vanilla MC loot.

A detailed list of monster levels and their loot will be added here soon.


Ranking & Playtime
Ever since the beginning of the server, ranking up didn't really involve any effort apart from simply being online. For the first time in nearly 6 years, the server ranking system will change.

After the update, the command /ranks will be available to all players. It will show every rank regular players can upgrade to, together with it's requirements and status. 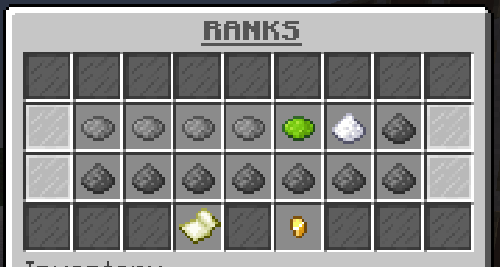 By clicking on the Sugar item, you will be prompted with a confirmation screen and you will rank up after accepting to pay the set amount of Rank Points.

A few new ranks will also be added to the list: Traveller, Chemist and Adventurer.

Along with the rank-up requirements changing and new ranks being added, the rank perks will also change however I haven't had time to work on this yet.

Ranking up will cost you quite some time and won't be cheap. This is done to prevent players from reaching max rank after just a few weeks of playing - which wouldn't be fun since the ranks will stick even after a server reset.

Boosters
I think that most of you are familiar with Boosters, but I'll quickly explain what they are: A booster will increase a certain server feature (like drops, MCMMO, Jobs, etc) for a certain amount of time. The booster system was one of the features I was planning on adding to the server during the previous update, but I never had time to actually implement it - This time I did.

At the moment I've only implemented 3 booster types: McMMO EXP, Jobs EXP/Money and Monster drops. They will be available in the server store after the update, but can also be acquired via the server crates.

Like I said, boosters will be available in the server store soon.

I haven't come up with a new way to buy the enchantments or what they will cost, but I do know that it will involve some of the custom items that will be added to the server as well.


Jobs & Achievements
Both the Jobs and Achievements plugins were also added to the server during the previous update. The upcoming update will change both plugins a little bit.

That's it for now guys. I know, not my best new post ever but I wrote a 15 page essay yesterday so I wasn't really in the mood for writing another long story.

I have not set a date for the update yet since I'm far from done with the preparations, but I'm hoping to update the server at the end of February, beginning of March.

Join our Discord server if you want to stay up-to-date with the latest server news and sneak-peeks.